I have to make a confession. For me it is extremely difficult to write about such a phenomenon as sound-art. First of all, because of the mysterious but yet intriguing nature of the sound itself. It is a challenge to try to describe sound effects with words, because the language of sound has its own specific vocabulary, one hardly translatable into text. As a rule we don’t question music as much as visual images. When we see a cinematic shot or painting, for example, we try to understand the meaning behind that image, desperately looking for a logical explanation of what we see. While listening to the music of Beethoven or a symphony of Bruckner, we don’t feel uncomfortable by not knowing the actual meaning behind it. Rather, we let ourselves be drowned or controlled by the sound. We don’t perceive sound as illustrated text. Sound can work outside the mechanisms of understanding. But despite that struggle I have taken risk of writing about sound-art legend Bernhard Leitner and his conception of sound as a space, as I believe his discoveries of a sound potential make us more aware of our listening experience and perception. 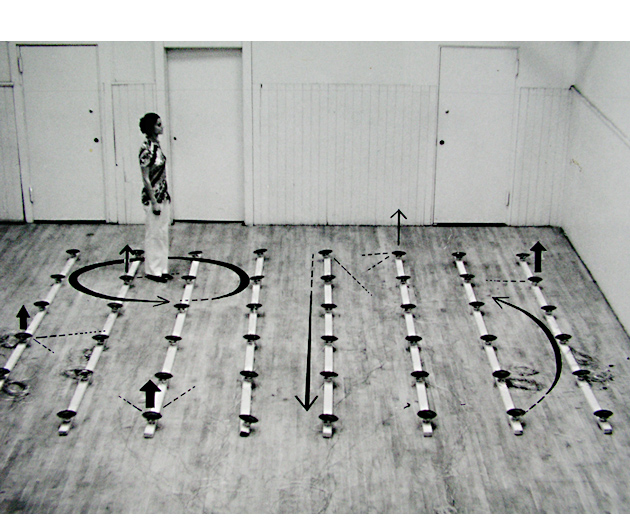 Born in Austria, Leitner studied architecture in Vienna and now is considered one of the pioneers of so-called “sound-installation.” The core of his art is using sound as a building material for creating an architectural space. In his manifest he states, “All works are sound space instruments. Each of them stipulates certain movements of sound, a certain way of defining space.” I remember my first experience with his work “Ton-Röhre” which is still exhibited in the Hamburger Bahnhof in Berlin. Loudspeakers are installed in a white-cube room in the center of the exhibition space. Coming inside the room, a visitor perceives how sound with different intensity, volume and tone moves from one loudspeaker to another creating different lines, shapes and contours. I noticed that to a certain extent you can see these lines and almost touch them. This unseen movement of sound creates a new space, of which the viewer/listener becomes a part. This work interestingly examines the edge between presence and absence. The space that Leitner has built is not physical or material, it is not really shown and cannot be touched. However it is presented as we perceive it through our physical senses: it is real and does exist. What is the relationship between the sound space and the actual, physical space of the exhibition room? The sound changes a space by giving it a new meaning. The actual space becomes a laboratory and in this case should serve as neutral and silent frame. But because of Letner’s installation it is not neutral or empty anymore, because it transforms the room by giving it a new dimension: the dimension of the sound. We remember the lesson given by John Cage: there is no such thing as silence. For Cage everything is sound. Indeed, in his famous 4’33” the sounds of the audience become a symphony. Leitner pushes a little bit further by creating through sound a visible and at the same time non-visible space. It becomes visible through our intellectual projection of the sounds we hear. In other words, inside our mind we draw these movements. 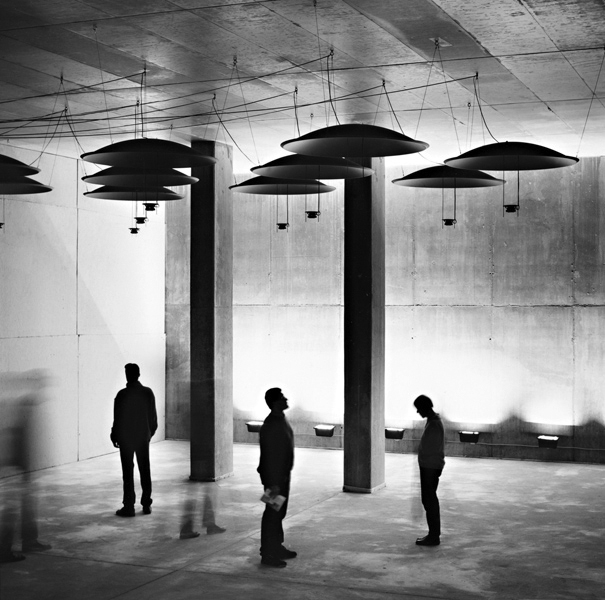 The discovery that we can actually see by listening is also presented in another of Leitner’s works, “Kopfräume”. This particular piece can only be perceived through headphones and was “designed” specifically for the interior of the head. The idea is that by putting these headphones on, a listener experiences a movement inside of his head by perceiving sounds. In our days, you can hardly surprise anyone with such form as performance as it has already become an accepted method in contemporary art. But what if the performance takes place in your own head? Once again, the sound travelling creates an inner movement that you can see by hearing. For me, this experience was a true miracle (and I am a very cynical person) and a complete mystery because this transformation of the sound into lines was faster than conscious awareness of how it happens. You feel incapable of realizing how exactly what you hear is changing into seeing, through which part of your body and brain it happens. I suppose the only one who knows the secret is Leitner himself. This acoustic work is accompanied by artist’s sketches with explanations of the listening/seeing process. Once again, as in some sort of a science laboratory.
Also very important for Leitner is destroying the distinction between the ear and the eye and a refusal of the idea of the fragmented body. He insists that we hear through our whole body, that it is a one organ and that sound is a proof of the interconnection of the inner and the outer, of the physical body and the inner soul. For Leitner, the way we perceive sound depends on our physical construction as we feel the sound vibration differently because we all have different physical features. It is also not a secret that the sound has a power over our body movements. This concept is perfectly shown in “Ton-Röhre” as well. The body position changes within the moving of the sound. Visitors of the installation go from one loudspeaker to another, thereby creating a dance and even becoming an artwork itself. 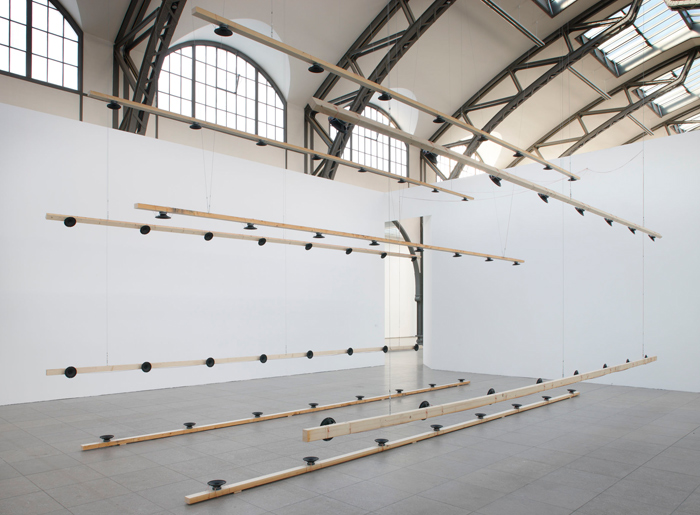 Sound carries a particular energy, and Leitner makes this energy visible by playing with rhythm, tone, intensity, length and many other aspects of the sound. In fact, the idea of using sound as a building material is not so bizarre as it may initially seem. Sound itself is very material. Consider, for example, the French composer Erik Satie who created so-called “Furniture music,” the music which can be used just like furniture. However, Satie’s idea was ironic and more focused on the substitution of already existing material rather than building new materials. The examination of the potential and the nature of the sound puts Leitner in a list of the greatest artistic discoverers of the 20th century.
In our very much visual-oriented and image-consumerist culture there is a lack of reflexivity about sound and its influence. But we all know that it affects our being. Imagine Hitchcock’s “Psycho” mute. The viewer would not be so scared by this movie without the sound, as the sound is responsible for building the entirety of the tension in the film. But as sound-art continues to develop, hopefully we can soon rehabilitate the importance of this kind of perception and discover more aspects of this phenomenon. If you ever have the opportunity to experience Bernhard Leitner’s work, do not miss it. Leitner’s work, just as sound itself, does not exist on its own. It always demands a receptionist.