The philosophy of contemporary culture in the world of Philipp Humm With influences in philosophy and pop culture, artist Philipp Rudolf Humm creates playful mise-en-scènes that examine the socio-politics of our contemporary world, in a genre best described by reputable Art Critic Edward Lucie Smith as Pop Expressionism. Executed in oil on canvas, Humm’s work employs a rich palette and hard-edged style normally associated with Pop Art, with an interest in the theories of Expressionism.
Existentialist thought merges with mythological allusions to provide bold, theatrical scenes that reflects the gaudy glamour and dark undercurrents of our modern culture. 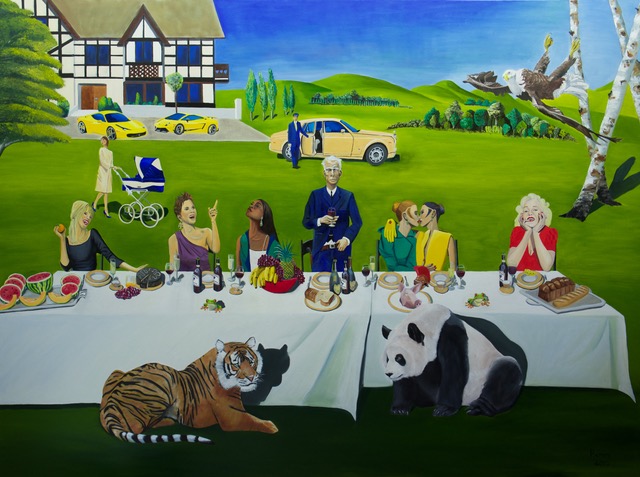 Like Gauguin Humm made an extraordinary leap from corporate to creative life. Having reached mainstream success as CEO at Vodafone,T-Mobile and Amazon, he then turned his strong work ethic to achieving excellence within painting and sculpting.
Humm initially studied Philosophy, before building a successful career in the worlds of advertising and business however, he never stopped painting. In January 2016 Humm turned his hand to oil paint, after attending a year’s worth of life drawing and sculpting classes at the London Fine Art Studios and the Florence Academy of Art to aid his process, consistently experimenting with medium and form. His interest in philosophy is reflected in his work, his series Being and Time a good example of this, with links to Heideger’s metaphysics alongside ideas expressed through the works of Samuel Beckett (a central figure in Humm’s work). Humm insists that art should not be purely decorative, seeking to give philosophical concepts to his work, that allow viewers to delve into surreal and poignant narratives. 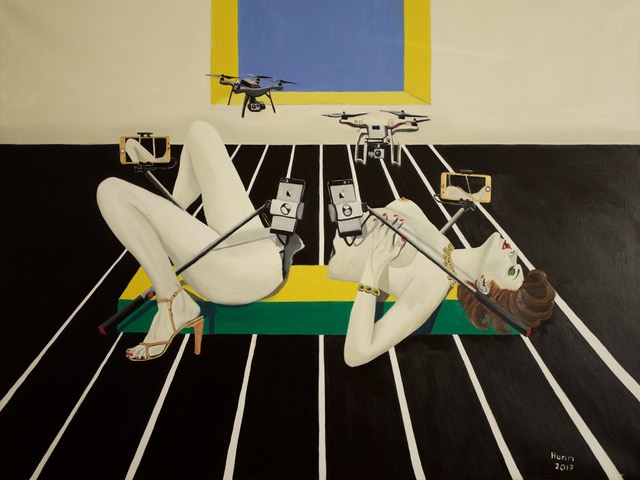 Having also spent many years behind the scenes of the advertising world, Humm was directly involved with its prominent and elite figures. This has placed the artist in an advantageous position from which to both critique, and expose, contemporary celebrity culture.
Drawing heavily on classical motifs of art history, with particular reference to the Renaissance period, Humm explores tensions between materiality and contemporary notions of our quest for beauty and perfection. His work plays with these contradictions, blending the classical and contemporary in pieces full of references to classical art history, from Boticelli’s Venus to Manet’s Olympia. 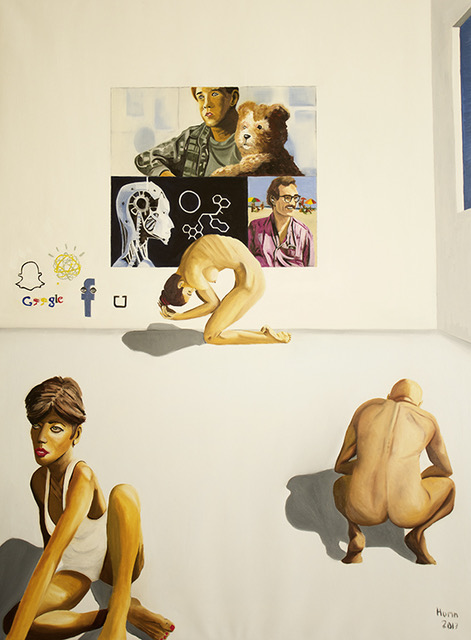 Humm has also created a series of boldly Expressionistic bronze sculptural pieces that evoke notions of classical beauty and primitive culture, blurring the lines between mythology and reality. Beginning his explorations in bronze from readings into the accounts of Pompeii, Humm’s figures are roughly cast, caught in moments of dynamism, movements frozen in time. Along with his works in oil, Humm’s sculptures further express contemporary concerns regarding body image and humanity’s quest for immortality. Pieces such as Bartholomew’s Skin (featuring a silicon replica of the flayed man present in Michelangelo’s Last Judgement) express Humm’s strive to experiment with form and material, as well as his interest in work that provides reference to art history.
Speaking of his creative process, Humm says:
“My art is about storytelling. So the painting or sculpture follows the story and not the other way around. In a way creating is for me a methodological and not a coincidental process. Art enables me to reflect on the duality of being, and express multifaceted contemplations from elements of history to comments on contemporary culture.”
Humm has a programme of global upcoming art exhibitions in New York, Las Vegas, LA, and Venice.