A man tears himself to pieces. He removes a finger with a pop, places intestines and brains into plastic trays, pours blood and shit too. He pulls off the skin from his face, revealing another identical layer below, just as sickish and pale as the one before it. He does it again and again, all the while humming to the rhythm of Ravel’s Boléro, playing softly on the background, elevator music style. He executes his own destruction dutifully and cheerfully, in a musical trance that compels him to madness. He stares into the camera, eyes gouged out, nose missing, still smiling. It is a destruction without end. For an instant after a part has been removed, the man appears to be whole again. He watches his own head being paraded in front of him by a conveyor belt where he has placed all his body pieces along with a gun, miniature skulls and bones, countless razors, and a giant pineapple. The music comes back relentlessly, increasing in volume, more instruments from the orchestra join in as they too are moved by a dangerous fascination to execute the same movements over and over. The man finds himself flying on an airplane, he fastens his seat belt, made of small human hands locked together and dons a gas mask. The Boléro reaches its climax and a blinding light consumes the airplane and the man slides from his seat to the ground, lifeless, his movements incongruous and unnatural. 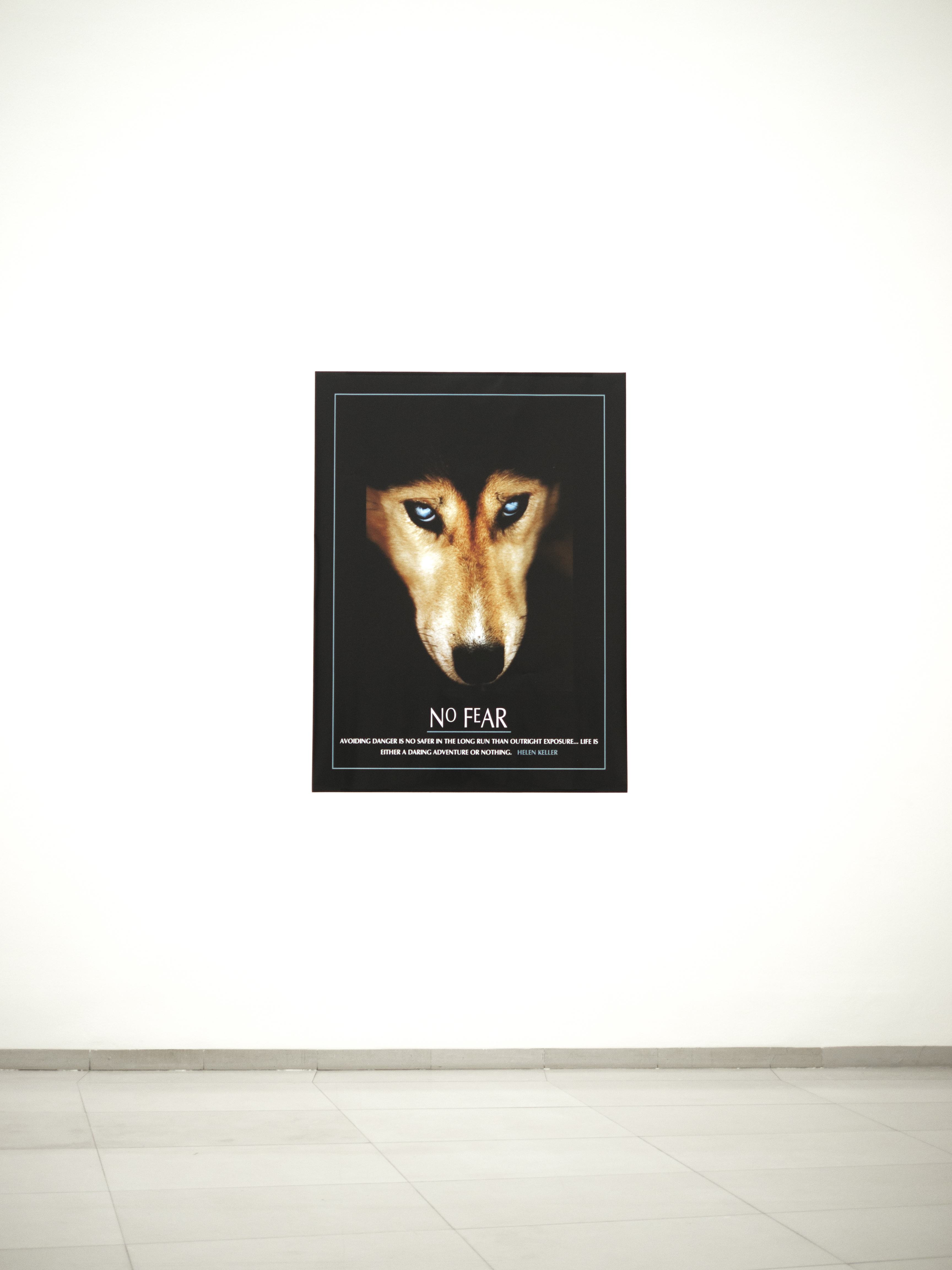 When Maurice Ravel first conceived his Boléro he imagined a factory as the ideal setting to play it in, alluding to the machine-like advance of the melody. It seems fitting then, that Ed Atkins should choose to include it in his digitally rendered, hauntingly empty airport, a security-instructions video of mechanized absurd abuse displayed in 3 huge flat screens hanging from a menacing industrial crane that takes over the whole room. As with the majority of Atkins’ body of work, “Safe Conduct” (2016) has been created in its entirety inside a computer, using 3D models and motion capture software. And just like the British artist’s previous creations, the two videos on display at the “Corpsing” exhibition at the Museum für Moderne Kunst Frankfurt grip the viewer with both fascination and disgust. The main character, a sort of stand-in or online avatar for Atkins (who also provides the voice and motion capturing) is a walking undead, a cipher for presence and absence. He appeals to our sensibility and pity when he stares at the camera and sadly sings as we focus on his dead eyes and his spotted, wrinkled, and dried out skin. He is suffering, he is dying, and yet, he has never been there. The efforts to suspend disbelief are constantly subverted or counteracted. The character model is tasked with adopting impossible postures, his teeth an artificial pearl white, he falls like a puppet whose master has discarded. Mixed in with the hyper-realistic 3D elements, there are visual effects stolen from traditional 2D animation as well as live action footage of a fist punching and breaking a wall from what seems to be an ’80s TV commercial. The kind of rectangular color frames that normally would display a commentator’s name in a talk show constantly wander into the screen, aimless and empty. The title of the work is introduced with a flaming effect right out of some old video game with heavy metal influences. They all act as reminders that what we are watching is a simulacrum of reality, or perhaps, a more realistic model of reality, understood as the confluence of different levels of existence, a construct of physical, psychical, ideological, and cybernetic experiences. 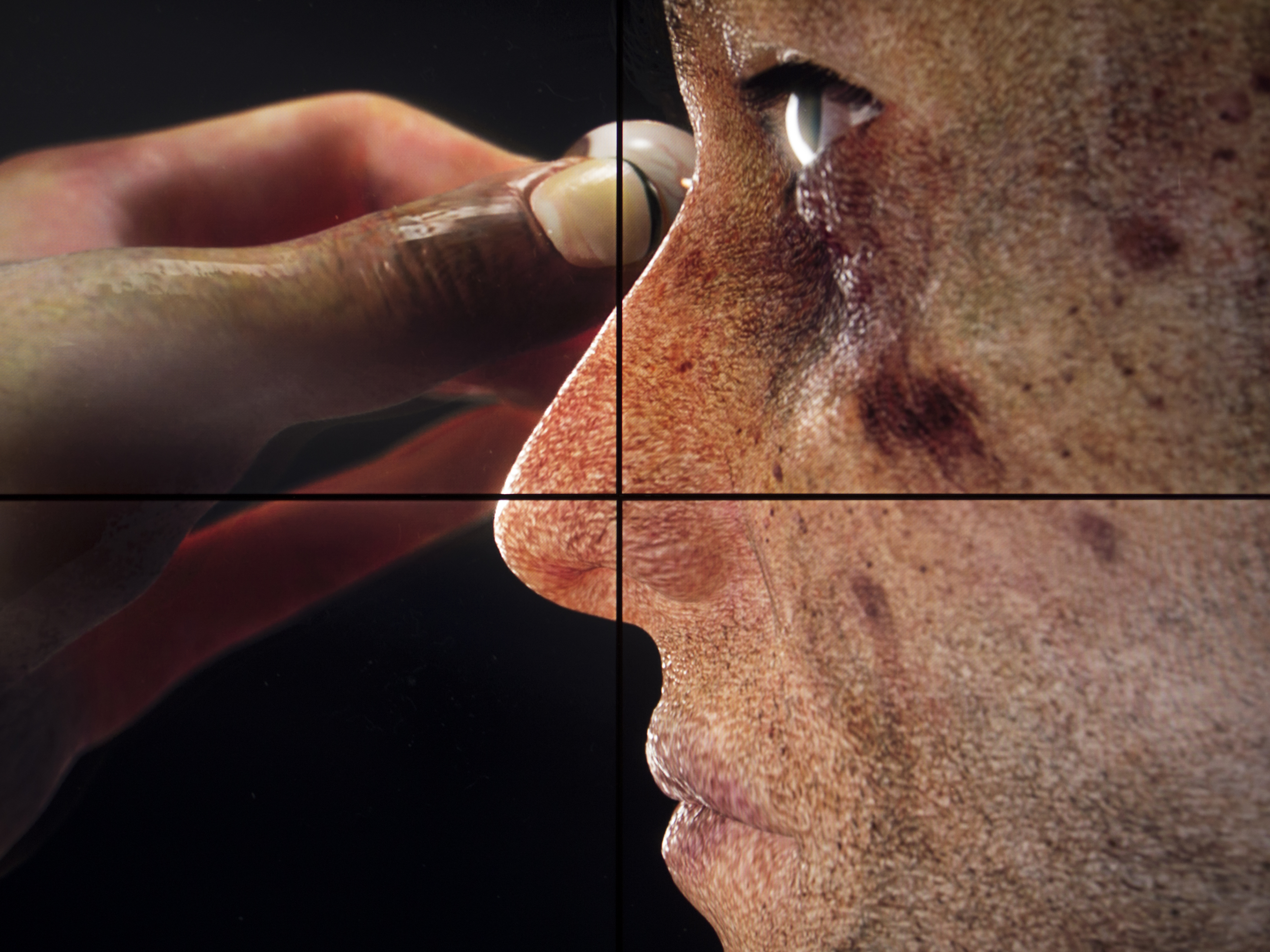 Atkins world is one in eternal creation and reconfiguration. He never hides his own interference, rather he displays it for all to see. “Hisser” (2015-17) the video installation occupying the whole first floor of the MMK constantly breaks its own narrative with what seem like conscious edition mistakes such as false starts and audio gaffes where in we clearly hear the microphone being hit as the speaker has gotten too close. Whispers, sniffing and leaking noises serve as soundtrack: the presence of the body emerges again, this time it is the body of the artist-creator. He feels so close, sharing the room with us. Atkins has compared witnessing a finished film to being in the presence of a corpse, something that used to contain life but now, while being  present, exhibits and confronts us with a lack. The tone of existential dread permeates the whole installation. The exact same video is projected in synchronicity across six huge screens spread into four different rooms. What initially feels like a superficial gesture of unnecessary monumentality eventually reveals a more subtle and unsettling implication. In the establishing shot for the video, we are presented with the character’s room, walls covered with motivational posters and the night table adorned with a huge human ear (perhaps a souvenir from the airport mutilations?); the dimensions and artificiality of it give it the appearance of a gigantic digital dollhouse. The camera pans vertically to the upper level of the house to reveal one identical version of the room after another. As this is reproduced across rows of screens the feeling of endlessness becomes stronger. Even if one chooses to focus on witnessing the video of one screen exclusively, one is constantly reminded of the existence of the parallel universes unfolding simultaneously as the sounds, themselves not synchronized but rather spread unevenly in space and time, creep from behind the projection we currently concentrate on. The pan continues, increasing in speed, spinning so fast the image almost becomes pure white light, an abyss in movement. When the finale comes, after the character has sung his song, masturbated to Rorschach tests and classical Greek sculptures and mumbled in his digital sleep, the ground trembles and opens to swallow him. He falls into the computer generated nothingness. He falls forever, his fall repeated in time and across infinite dimensions.